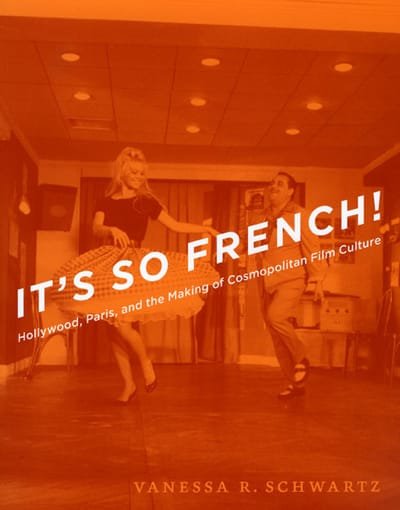 It's So French! Hollywood, Paris and the Making of Cosmopolitan Film Culture
(University of Chicago, 2007)
Buy on Amazon
Publisher's Page

The recent history of cultural exchange between France and the United States would appear to be defined by “freedom fries” and boycotts against Beaujolais—or, on the other side of the Atlantic, by enraged farmers toppling statues of Ronald McDonald. But this dismal state of affairs is a long way from the mutual admiration that followed World War II, epitomized in a 1958 cover of Look magazine that declared “Brigitte Bardot conquers America.” It’s So French! explores the close affinity between the French and American film industries that flourished in the postwar years, breaking down myths of American imperialism and French cultural protectionism while illuminating the vital role that cinema has played in the globalization of culture.

Hollywood was once enamored with everything French and this infatuation blossomed in a wildly popular series of films including An American in Paris, Gigi, and Funny Face. Schwartz here examines the visual appeal of such films, and then broadens her analysis to explore their production and distribution, probing the profitable influences that Hollywood and Paris exerted on each other. This exchange moved beyond individual films with the sensational spectacle of the Cannes Film Festival and the meteoric career of Brigitte Bardot. And in turn, their success led to a new kind of film that celebrated internationalism and cultural hybridity. Ultimately, Schwartz uncovers an intriguing paradox: that the road to globalization was paved with nationalist clichés, and thus, films beloved for being so French were in fact the first signs of a nascent cosmopolitan culture.

Packed with an array of colorful film stills, publicity photographs, paparazzi shots, ads, and never before seen archival images, It’s So French! is an incisive account of the fertile collaboration between France and the United States that expanded the geographic horizons of both filmmaking and filmgoing, forever changing what the world saw and dreamed of when they went to the movies.